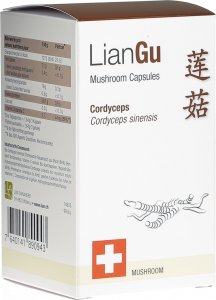 The LianGu Cordyceps Mushrooms contains the vital mushroom Cordyceps also called Chinese caterpillar mushroom. The use of vital mushrooms in health care originates from Traditional Chinese Medicine as well as Traditional European Naturopathy.
Cordyceps is said to have a positive influence on the energy balance and endurance. It is generally considered to be a tonic and is used as a restorative for colds.

Like all products of the LianGu line, LianGu Cordyceps meets the highest biological and quality standards. The entire life cycle of a fungus is included in the production of LianGu products. This includes the fruiting body, mycelium, spores, primordia and extracellular matrix. Thus all important ingredients are contained in concentrated form.

Our immune system
We explain how the immune system works, how it can get out of balance, how to support it both short-term and long-term and how to avoid bad influences.